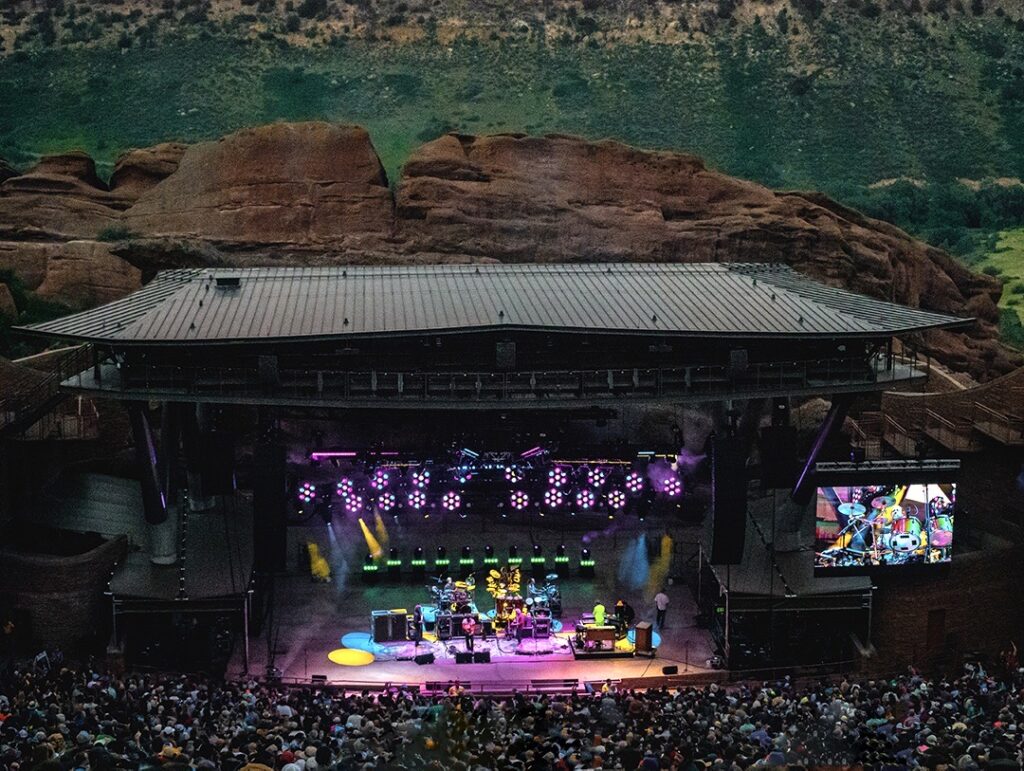 This Must Be The Place…

It’s hard to put into words how nice it was to hear live music again. This particular Incident has been in the making for over a year. A quick step back in time for just one story…

The original plan was to head up to the mountains for a weekend. We would enjoy some SCI in Dillon and then roll over to Red Rocks. I had big plans to propose during the space between shows. Spoiler alert – that trip didn’t happen.

“Howdy friends! We’re gonna settle in for a few days and try to enjoy this as much as we can.”

When String Cheese greeted us like this, we knew we were in for a good run. 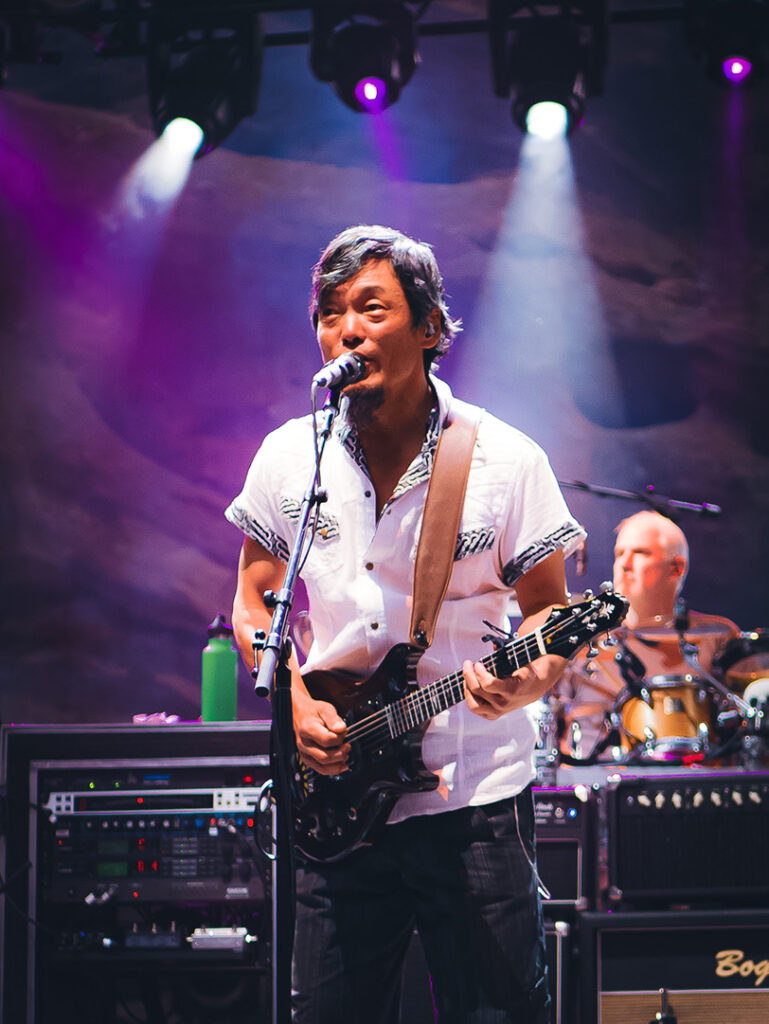 The 2021 Incident on the Rocks opened with a 16 minute “Shine” that helped to reconnect the band and the community. It wasn’t long before we all started to get our sea legs again.

The first night continued to roll on with a fun “Boo Boo’s Pik-A-Nik” into “Can’t Stop Now.” And just like that, the entire amphitheatre was dancing out of control.

The entire first night seemed full of metaphors for the hell that was 2020. “Restless Wind,” “Round the Wheel” and “Beautiful” played together nicely to close out the first set.

The energy was climbing at this point and showed no signs of stopping. Bill greeted us to start the second set with some encouraging words of affirmation reminding us that we need not take this for granted.

Second set opened with a soft melodic tone to welcome everyone back to the show. Kang’s violin started playing over the funky bass groove to get us all dancing to “Hi Ho No Show.” 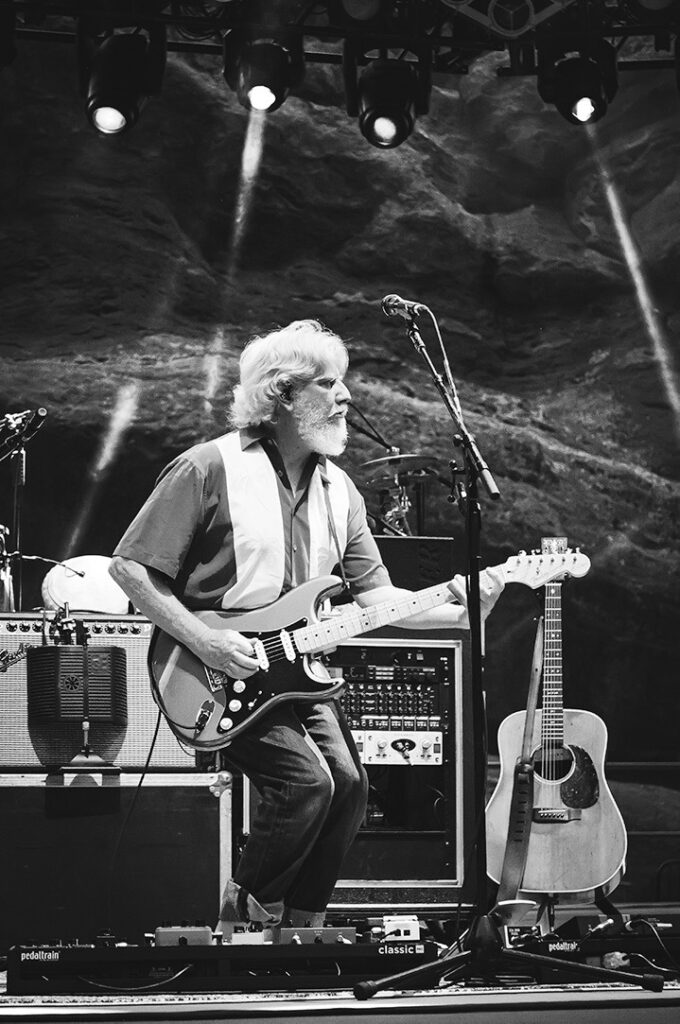 A favorite moment from the entire weekend followed when Keith, Jason and Michael started the melody for “This Must Be The Place.” Being able to dance with my wife to our song, listening to Cheese play it live at Red Rocks – you can’t put that emotion into words. I will hold onto that moment until my heart stops.

The positive vibe kept soaring to new heights when they played into “Heads Up Jam.”

The other major highlight from the second set came when Bill shared with us a tune that he wrote, “Good Times Around the Bend.” He told us this song helped him a lot through this past year. You could sense from the Cheese family that he’s not alone on this one either.

The night finished out on a very upbeat, fun dance vibe with “Joyful Sound,” “Rumble,” “Black and White” and the second set closed with the always favorite “Texas.”

The encore followed with the dance theme and they shut the night down with an 11-minute strong “Colliding.” 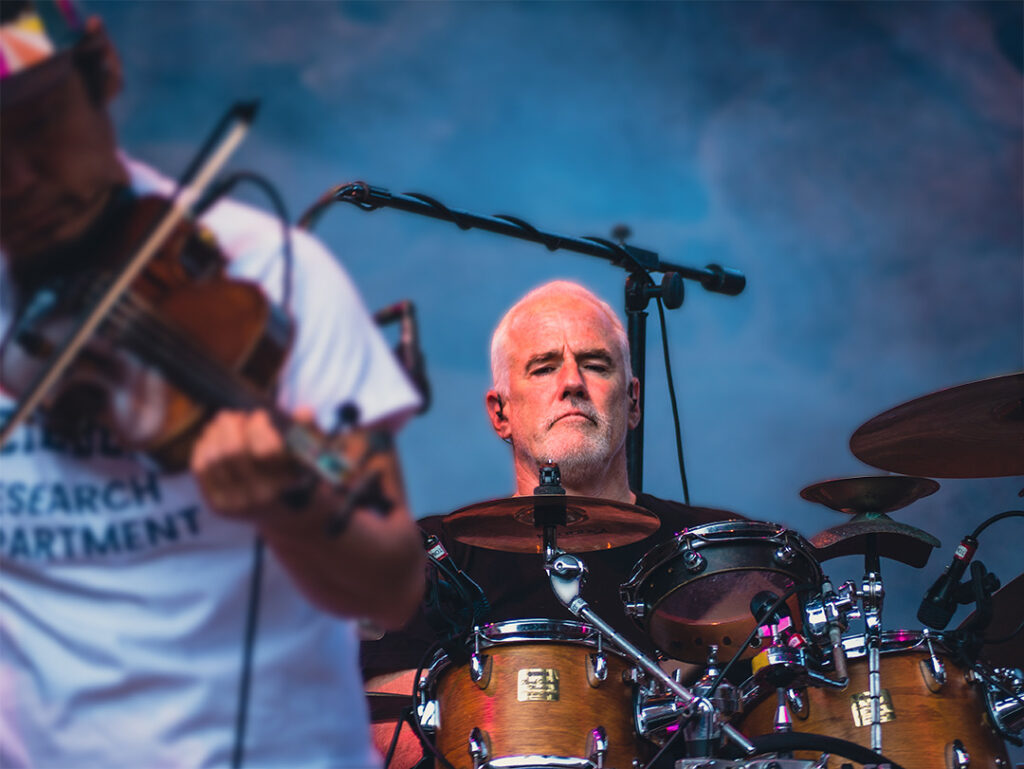 Night two would pick up right where we left off. Set one was coming in hot with “Sirens>Believe” to kick us off. Kim Dawson would come out to help with “Misty Mountain Hop” to end the first set. Set two had a surprise for us early when we were treated to Peter Anspach from Goose sitting in on keys for “Jellyfish.”

Technically, we got two sets and an encore on night two. The encore was solid enough it could be considered a third set. Kim Dawson joined the guys on stage once again. Jason Hand paid tribute to Biz Markie and had us all singing “Oh baby you, got what I need…”

All of Red Rocks was moving with such energy you would think the night was just getting started. SCI would wrap up night two with Kim and Murray’s favorite, “Colorado Bluebird Sky.” 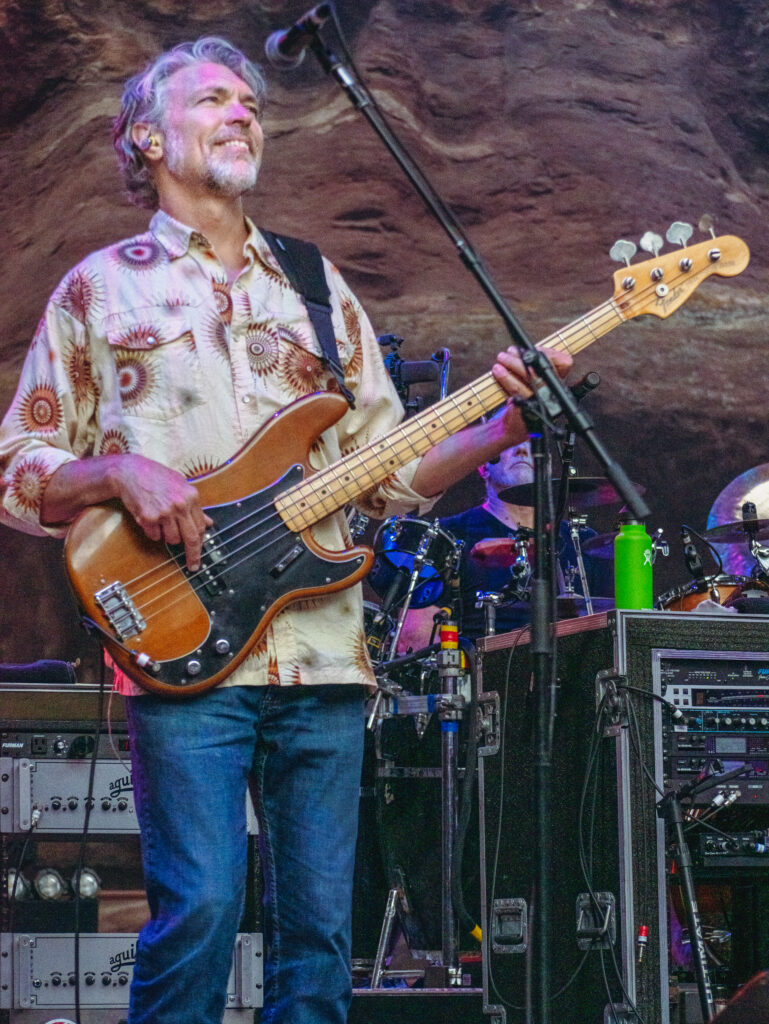 This statement has never been more appropriate. Sunday got off to a fun start with “Lonesome Fiddle Blues” to get everybody up and moving right away.

The first set really started to open up when they played “45th of November.” This kept rolling into “Born on the Wrong Planet” into “Mouna Bowa.” One song seamlessly into the next and before you know it we are all grooving to a quintessential SCI tune, “Miss Brown’s Teahouse.” 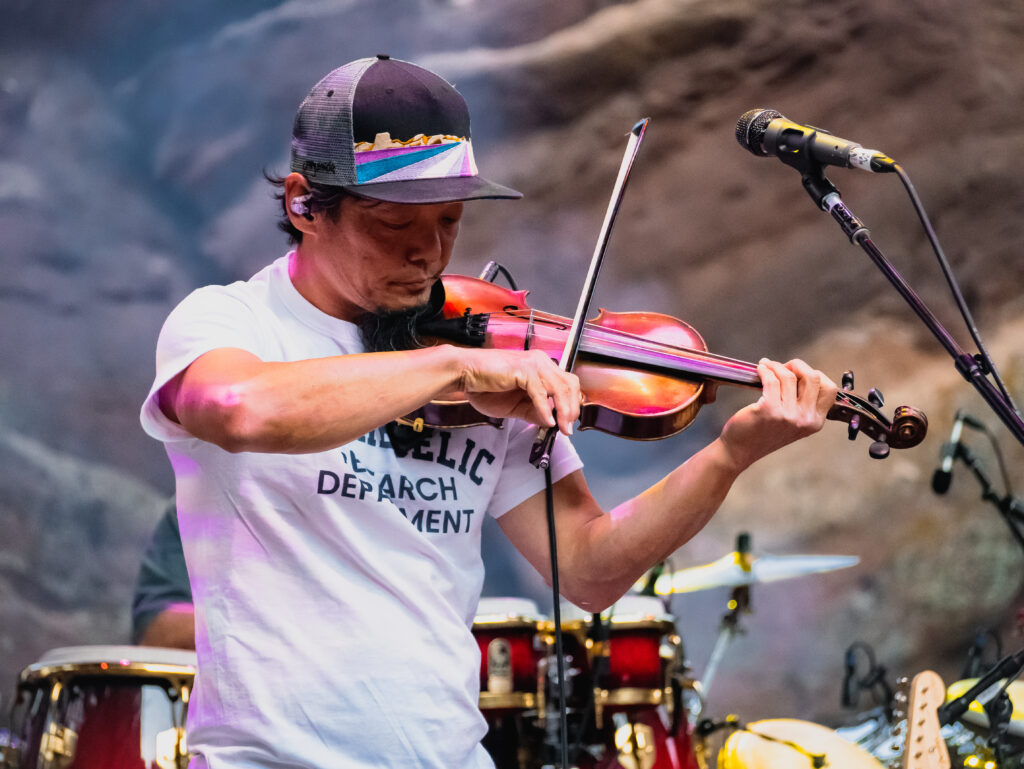 The place was filled with a sort of bittersweet energy as the weekend headed into the final set of music. The final set for the weekend didn’t slow down and made sure to leave all of hearts full and spirits high. Opening with “All We Got” and cruising straight on into “Vertigo” and then into “Bumpin’ Reel.” Then we all head into the night, dancing with our crew and taking it all in and everyone is singing along to “Get Tight.” The final push for the run came at us with “Come As You Are” into a tribal-like drums into the “Rhythm Of The Road.” Closing out the final set was a song Kyle wrote about the impact of live music on him – specifically the Grateful Dead – “The Big Reveal.” 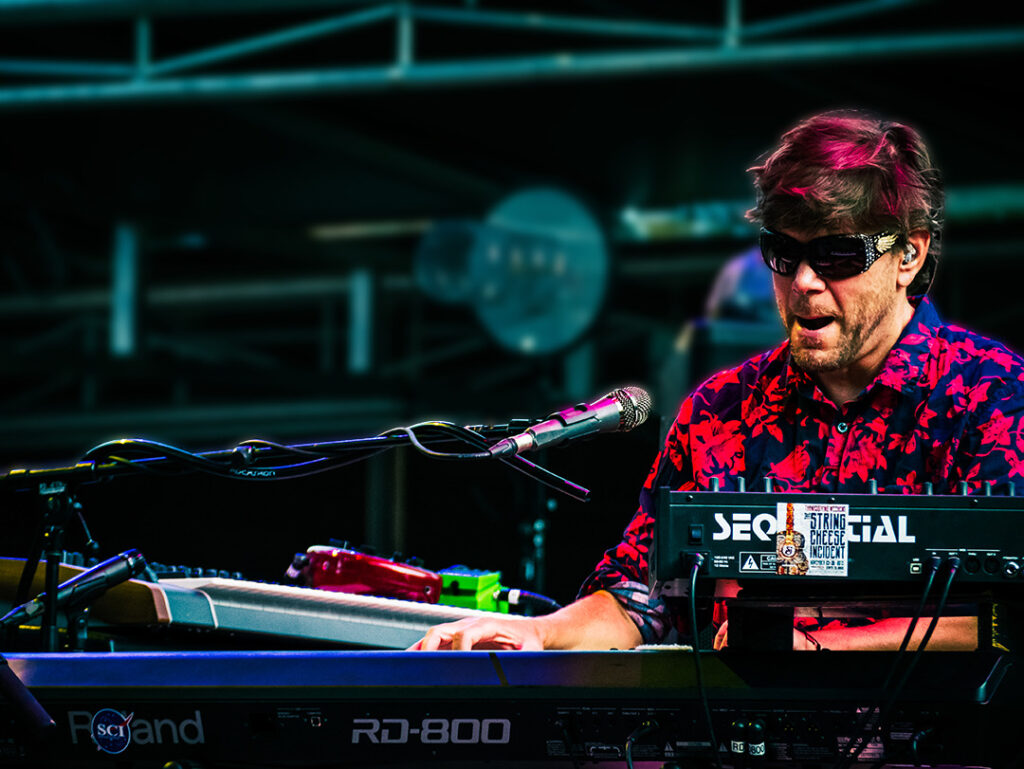 The final crescendo would come almost without warning. Each night getting better as the show went on, each encore proving to be more energetic than the previous – and the final encore would follow suit: “I Know You Rider “into “Stir It Up” and back into “I Know You Rider.”

String Cheese Incident never disappoints. The community, the music, the energy…always comes through and things just have a funny way of falling into place. This Incident was no different. Let’s not take this for granted.

SCI will be out on the road August 6-7 at the Greek Theatre in Berkeley, California. You can also join them in Runaway Bay, Jamaica for the International Incidents January 21-25 and 26-30.