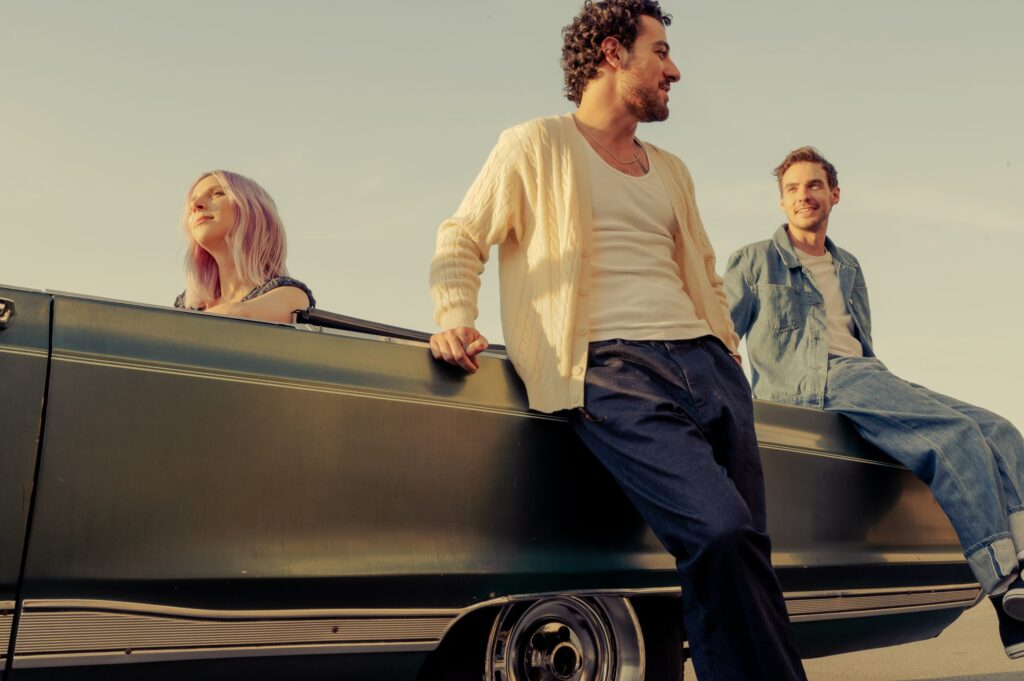 Dubbed “Indie Folk,” “Indie Rock,” and “Contemporary Folk,” Canadian trio Wild Rivers offers a harmony-laden sound that would be as equally at home on ’70s A.M. radio as today’s adult alternative stations. On February 4, the band (Khalid Yassein, Devan Glover and Andrew Oliver) will release Sidelines [Nettwerk Music Group], a 10-track recording produced by Peter Katis [The National, Death Cab for Cutie]. On Tuesday, February 8, Wild Rivers will perform at Saturn. Recently, Oliver spoke with us by phone from Toronto.

Southern Stages: Andy, thanks for your time. Are you still in Toronto or are you on the road yet?

Andrew Oliver: We are in Toronto. We are at our friend’s studio recording a couple of acoustic versions of some of the songs that are about to come out. We head out on the 27th – we have a show in Pittsburgh and then we’re out for a few weeks and we’ll see you in Birmingham not too long after that.

Southern Stages: We are really enjoying Sidelines. How did the album’s material take shape? Are these newer compositions, older ones or a mixture of both?

Oliver: It’s a bit of a mixture. About two years ago, we went down to L.A. for four months and just wrote and stayed in a house together. Most of the songs came out of that stretch of time. There are one or two that were written well before that and just didn’t make sense on any other project. It took a long time to get it all together and we recorded it in a bunch of different places.

Southern Stages: Do you find that songs continue to evolve even after you carry them into the recording studio?

Oliver: For sure, especially this time. We were working with a producer named Peter Katis, who’s done The National and a bunch of stuff where there is a lot of texture and sonic elements. We were pretty adamant about honing in on the core of the songs before we went into the studio, but definitely at the last minute we threw a bunch of stuff against the wall in terms of arrangements and adding synth sounds and guitar parts.

Southern Stages: How did your band get connected with Peter?

Oliver: We’re always on the lookout for producers and we are all nerds in terms of reading all the credits of our favorite albums and he has been on our list for a while of people we wanted to work with. We went out on tour with a band called The Paper Kites a couple of years ago when we were starting to formulate the idea for this album. They had just done their latest album with him. We were opening for them and he came out to one of their shows and we met him briefly and got along. When we started to look for producers for this album, he was our first choice. It worked out great.

Southern Stages: You play several instruments. Do you tend to write mostly on guitar, keys or something else?

Southern Stages: How would you describe your band’s writing process?

Oliver: We had multiple ways of doing it for this album. Khal had three or four of the songs pretty fully-formed before he brought them to us and he does some writing sessions in Nashville – we were fortunate to get some other writers’ input on the songs. Dev had a couple that she brought in – I believe she originated “Amsterdam” by herself and brought it to us. And then about half the album was us just sitting in a room together.

Southern Stages: Are all of the band’s members still based in Toronto?

Oliver: We are for the moment, yes.

Southern Stages: Was the Covid lockdown period a prolific time for you, a restful one or some of both?

Oliver: I’d say all of the above. It hit us at a weird time. We had basically just started recording with Peter in March 2020 when Covid started. We had driven down to Connecticut to his studio and were all set up to be there for almost a month to knock the whole record out. About halfway through it, they were talking about closing the border so we came home and put the record on pause. It was not a very clear process. We went up to a cottage for a couple of weeks and recorded it ourselves and Peter would remotely produce. We would send what we’d done that day and he would give us his feedback on it. We ended up finishing the album at this studio in Kingston – a college town in Ontario. We are so used to being on the road most of the year, so there was the silver lining of getting a lot more time with our families and friends. But it came at a tough time in the record process and we ended up making it work.

Southern Stages: Did you enjoy the process of recording yourselves?

Oliver: It was fun and it’s something we’re all interested in and we all mess around on our own on stuff not related to the band. But we usually leave it up to the professionals when we go to record as a band, so it’s something we’d been wanting to do for a while – to take more control over that part of the process. We learned a lot and spent a lot of time fixing technical issues, but it was fun.

Southern Stages: Some artists tell me this is a great time for the industry in that music can be easily accessed and purchased. Others say that the flood of content and outlets makes it difficult to be found among the crowd. How do you view the current climate?

Oliver: I hear it from both angles. We got lucky – our first album came out as Spotify was becoming a big thing and we got swept up in it and got lucky on getting on playlists. When we play at a show, about 90% of the people there found us on Spotify or a similar streaming service. So, for us it’s made our whole career and it’s been great. But there’s so much supply that everything feels a little less important.

Southern Stages: How do songs stay fresh and relevant to you after you’ve performed them literally hundreds of times?

Oliver: That’s a good question. It doesn’t always [laughs]. We try and change them up pretty often – we’ll do it more stripped down or have a more upbeat version or a solo section. We’re lucky that we are at a point now that we have enough songs that we can cycle through on different tours. We went out a couple of months ago and the setlist we’re doing a couple of weeks from now is quite different from that one. It’s about finding ways to change it and keep challenging ourselves.

Wild Rivers will perform at Saturn on Tuesday, February 8 at 8 p.m. Advance tickets to the 18+ show are $18 and can be purchased at www.saturnbirmingham.com.