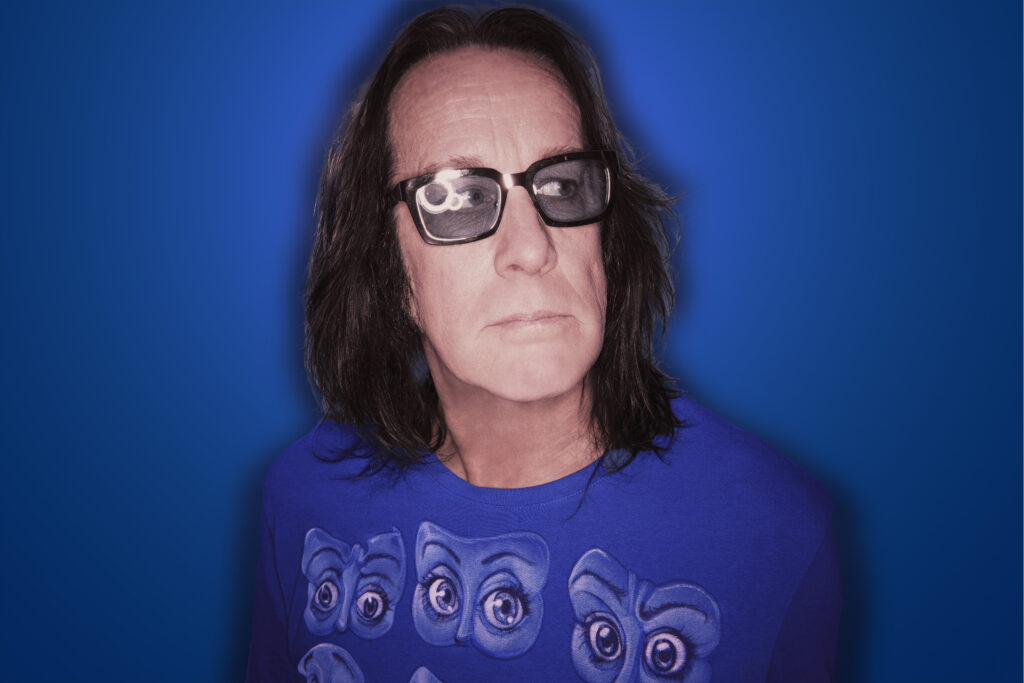 Todd Rundgren has never been one to sit still or accept whatever current technology or trends are in the mainstream.  Having already been a pioneer in computer/video technology and interactive media, Rundgren once again finds himself at the forefront of live performance in the age of COVID.

Rundgren will launch a virtual Clearly Human Tour on February 14th, which will feature 25 performances geo-fenced and localized to different U.S. cities but performed from a single venue in Chicago.  Each show will be “designed” to the nuances of each city on the tour schedule, including local landmarks on a video wall as well as city-specific catering for the band and crew in order to create an accurate sense of place.  Single-ticket purchases will be limited to fans who live within each show’s metropolitan area, while others may purchase multi-show ticket bundles to watch virtually.

Remote meet-and-greets with Rundgren will be available at every show, as will options to select from multiple camera angles.  A virtual audience will be displayed on several rows of video screens in front of the band, enabling them to “see” their audience as they perform.  A handful of tickets will be available to attend each show in person (socially distanced of course), in accordance with local COVID laws in Chicago at that time.

While the concept of this tour lends itself to the limitations of a social-distancing world, Rundgren actually conceived the idea several years ago as a solution to the challenges of reducing his own carbon footprint during the current conditions of climate change.

“My whole impetus for coming up with this started back when the climate was affecting travel, and I had changed the way I travel for touring to be much more based on flying than driving,” said Rundgren in a recent video press conference discussing the tour.  He originally envisioned himself and his band performing in one venue while a live audience watched via closed-circuit video from another venue in a different city.  “I thought maybe you could tour virtually – set up in one place and you could send the show out to another venue, so people would still have the rest of the experience… as if it was a live show.  Then the recent pandemic meant that the audience couldn’t go to the gig either, and that’s when it became totally virtual.”

Rundgren says that this tour will be more like a Broadway show than a traditional travelling roadshow, with a higher level attention to making the stage setup more appealing to the virtual audience.

“You build your set, and you don’t have to move everything every day – you can make everything more elaborate…as opposed to the concept of putting something together, tearing it down the next day, and then putting up again the day after that.”

The Clearly Human Tour will be performed by a 10-piece band, and will feature songs from his 1989 album, Nearly Human, as well as other selections spanning his decades-long career.  Rundgren was originally set to do a traditional tour this February, but those plans were put on hold last summer when it became clear that COVID restrictions would extend into 2021.  It was then that he decided to re-visit his idea of a virtual tour.  Since Nearly Human was an album that was recorded “live” in the studio with a full band (as well as the subsequent tour), he thought it might be a good idea to update that experience for a virtual audience.

“I wanted to do something that (typically) might not be practical to tour with but has some high production value.  A large band gives the audience something to look at, with the band interacting and responding to each other,” said Rundgren.  “Having fun is more important, especially in our current environment.”

Rundgren has maintained a cult following with his legions of diehard fans ever since his first hit album, Something/Anything, in 1972.  Todd took a left turn with the eccentric A Wizard, A True Star the following year, and has seemingly continued to zig whenever he was expected to zag, which is precisely why he has endeared himself to his loyal following.

Rundgren has also made a career of being at the forefront of technology and creativity, including designing the first-ever graphics tablet for Apple in 1979; creating the first music video (“Time Heals”) to utilize state-of-the-art compositing of live action and computer graphics in 1981 (which was also the second video ever aired on MTV); creating an album entirely with his own voice in 1985 (appropriately titled A Cappella); recording the album 2nd Wind at the Palace of Fine Arts Theatre in San Francisco in front of a live audience; offering the first commercial music downloads in 1992; re-inventing himself as “TR-I” (Todd Rundgren Interactive) in 1993; founding PatroNet, the first online direct artist subscription service in 1998; and producing the first full-length concert shot with multiple Virtual Reality 360º cameras in 2016.

At 72 years-old, Todd Rundgren doesn’t appear to be slowing down, having released dozens of albums of his own and with his band, Utopia, as well as a bevy of album productions for other artists.  As mentioned earlier, he has yet another tour planned for later in the year, as well as a forthcoming new album entitled Space Force.