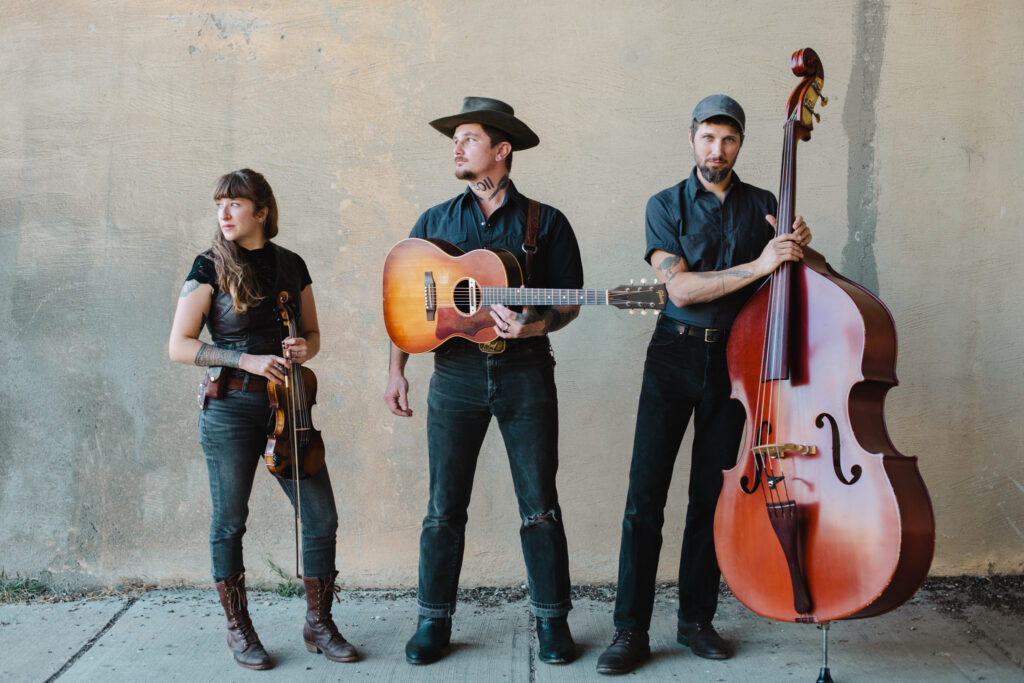 “My whole family is from Alabama. I’ve hopped more trains out of the (Birmingham) Boyles Yard – the CSX yard – than probably any other yard in the country,” recalls Benjamin Tod, frontman for Lost Dog Street Band. On January 21, the band will release  Glory – a 10-track collection of new material – on its own Anti-Corp Music record label. On Friday, January 14, Lost Dog Street Band (Tod, Ashley Mae and Jeff Loops), will perform at Saturn. Recently, Tod spoke with us by phone from his Kentucky home.

Southern Stages: Benjamin, thanks for your time today. We are really enjoying Glory. How did the body of songs take shape?

Benjamin Tod: Basically, all albums that I make are some combination of things from a decade ago to the week of the first recording. I have a huge stack of songs that I pull from when it makes sense to do so and they apply easily to the concept of the album. Throughout the process of recording, I end up writing just a banger for the album and get inspired to some degree through the recording. It’s kind of a mixed bag.

Southern Stages: Over what period of time was the album recorded?

Tod: I think it was started in December 2020  – it’s been a long time coming. Lost Dog albums are always really frustrating for me in comparison to my solo albums. I’ve got to lay down tracks and then I’ve got to wait on everyone else. Our bassist lives in North Carolina so he has to satellite his bass tracks from his home studio to Nashville and then we have to fit it all together. It’s a fire drill.

Southern Stages: Where is your home base these days?

Southern Stages: What was the Covid downtime like for you? Was it a prolific time, a relaxing time or something else?

Tod: I would say that I’m more in the twilight of my career – my writing has slowed down in general from when I was in my prime. Tracks like “End With You” – that was actually written two weeks before the Covid lockdown. A lot of my writing has an intuition, if you will. The first line of that tune is “In the wake of all that’s coming, it’s so good to hold you dear” is prophetic in some way. A lot of things that I write end up being that way. I guess years of traveling has given me a different type of intuition about the world around me. There are certainly some songs that I’ve written in the last two years that probably would not have come to be without the general situations of the Covid lockdown and the unrest and general chaos in our society.

Southern Stages: Given an artist’s life tends to revolve around travel, touring income and audience interaction, I can only imagine the upheaval of that unusual time.

Tod: I’m a lot luckier or – I don’t know what the word would be exactly – [in that] I’ve laid a foundation of music and publishing, so financially we can float. We can live off of the money that comes in month-by-month from publishing and royalties. A lot of my friends were not nearly as lucky. I’ve been on the road since I was 16 and I’m a homebody now. As far as the general psychology of being trapped here, it didn’t bother me at all. It gave me time to do some things – I had a surgery that I needed, I dealt with a lot of projects and I cleared 10 acres of land. There’s always something to do here.

Southern Stages: Your band is a success story in the DIY, independent music world. If you will, talk about the current climate and state of the industry.

Tod: I think back to the ’70s and how money was made back then. There was such a tight control on the viewership of music in general – you got radio royalties and you got record royalties. Now, you’ve got royalties from literally from thousands of subsidiaries of companies and there’s a hundred branches of Spotify. The power struggle within the industry really favors the artist right now, in my opinion, more than it ever has because an artist can speak directly to the consumer and it’s basically a perfect storm of free enterprise. People can go find what they enjoy and can support it and the artist can directly make the money. It’s kind of cut out the dinosaurs on Music Row and they have no idea what to do. I’ve been in multiple bad deals and came out mainly unscathed, but they’re clueless. They’re still trying to run the same program they were running 20 years ago. They have no idea how to make someone famous – I have a better idea of how to make someone famous than someone charging $50,000 to do it on Music Row.

Southern Stages: It’s great to hear that the gatekeeper has been removed, so to speak.

Tod: Yes, and It’s brought a revival in this music. I talk about this often, buy when we started doing this 10 years ago, this wasn’t cool, that Alt-Country, Outlaw thing. Now, it’s flooded and the artist is empowered.

Southern Stages: With several albums under your belt, how do you comprise your setlists these days?

Tod: A lot of it comes down to variables with my health and also with intonation and things like that. I have nerve damage in my hands, so people will notice throughout a set that if I play a faster flatpicking song, I’ll have to immediately go into a softer fingerpicking song. It’s really slowed me down a lot. We have so  many songs from so long ago – if we don’t play “September Doves,” there’s a large portion of the crowd that will be upset. Any band that makes it anywhere runs into this issue. So, 30 to 35% of the set is out the window with standards.

Southern Stages: How do songs stay fresh and relevant to you after you’ve performed them hundreds of times?

Tod: Man, you’ve got some good questions. Really, there’s no way for me to gauge it. I will start playing a song and it will take me right back to when I wrote it. It’s nearly impossible to do that unnaturally. I always say it’s impossible to care about something you don’t care about. You cannot force someone to care about something they don’t care about – it’s impossible. But at least every four times on tour, one of those songs I’ve played a million times hits me right in the gut and I can feel tears behind my eyes. It does happen.

On Friday, January 14, Lost Dog Street Band will perform at Saturn. Advance tickets to the 9 p.m., 18+ show are $15 and can be purchased at www.saturnbirmingham.com.