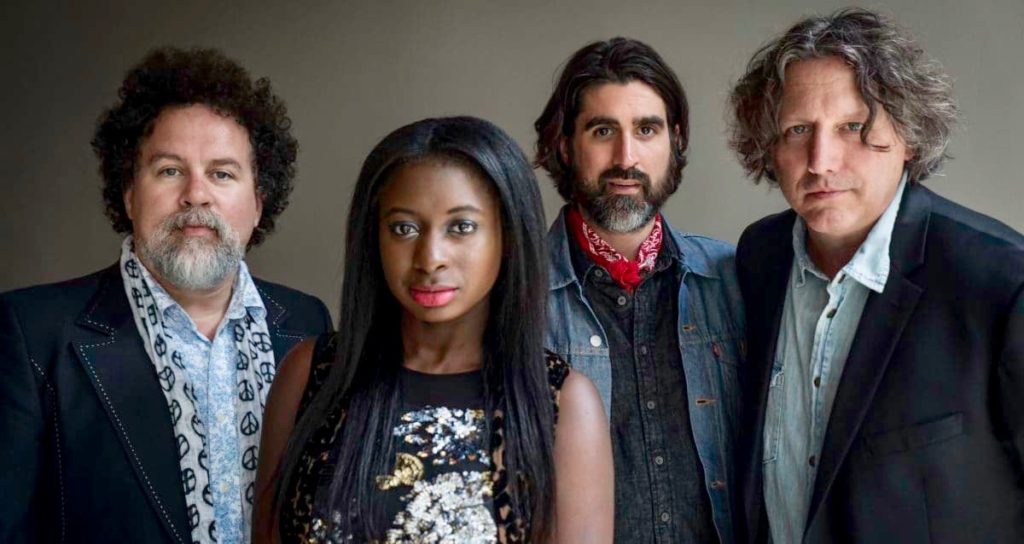 Steve Gorman chuckles when I suggest that he is quickly catching up to Warren Haynes as the busiest man in show business. After all, the Trigger Hippy drummer/radio talk show host/author doesn’t have much white space on his calendar these days. Gorman, formerly of The Black Crowes, has recently written a tell-all book about his days in the band titled Hard To Handle: The Life and Death of The Black Crowes [Da Capo Press]. In October, Trigger Hippy – Gorman, Nick Govrik, Amber Woodhouse and Ed Jurdi – released Full Circle & Then Some [Turkey Grass Records], the delayed follow-up to the band’s 2014 debut release. The album’s title is fitting as Gorman and Govrik reformed Trigger Hippy after an extended hiatus, revamped its lineup and moved it from side-project status to full-time band. On Saturday, December 14, Trigger Hippy will perform at WorkPlay. Ice Station Zebra will open the 8 p.m. show. Recently, Gorman spoke with us by phone from his Nashville home.

Birmingham Stages: Steve, thanks for your time. I know we are here to discuss Trigger Hippy, but I did want to mention that I’m currently reading Hard To Handle. Your candor in telling the warts-and-all story of The Black Crowes makes it a great read.

Steve Gorman: Thank you, man. I didn’t see the point in writing something that didn’t approach it with that mindset. People come up to me and want to argue with some of the things I wrote and I want to say, “I’m not campaigning here – I’m not trying to get your vote. I’m just trying to give my perspective.” The sacrifices I made and the stupid decisions I made and the times I was part of something great – I’m not trying to convince anybody that I’m right about anything, but I can just tell you what happened.

Birmingham Stages: As the book was about to be released, did you have any feelings of anxiousness about getting those stories out to the public?

Gorman: I had some of that once we agreed to do it. By the time it comes out, you don’t even care if people like it  – you just think, “Put the thing out – let’s go already.”

Birmingham Stages: If you will, talk about revamping and reforming Trigger Hippy.

Gorman: We put a record out in 2014 and, almost immediately, it became apparent that the band was not built to last and that’s not an indictment of anybody; it’s just a statement of fact. None of it was personal animosity and, trust me, that’s rare in a band. We didn’t have any drama. Nick and I always wanted this to be a full-time band and a working band – playing shows, recording and moving forward at all times. It was pretty obvious early on that we had a different definition than everybody else and that’s okay. I respect chemistry above anything else and that band was a lot of fun and a sea change from life in The Black Crowes. If I was guilty of anything, it was trying to put a square peg in a round hole where that band was concerned. About six months later, we put a band together at my kid’s school for a fundraiser. That night, Nick and I said, “Let’s find some people” and that little one-off gig really got us thinking. I saw Ed Jurdi and he said, “I’d love to put my hat in the ring” and I said, “Okay, cool, let’s do it” because I love Ed and I wouldn’t have thought to even ask him because he’s really busy. He and Nick clicked right away and we were all on the same page.

Birmingham Stages: Over the course of your career, you’ve played some songs literally thousands of times. How do older songs stay fresh to you?

Gorman: in the case of The Black Crowes, in both good and bad ways, there were nights we played “Jealous Again” nothing like the night before and nothing like the recorded version. You go see Tom Petty & The Heartbreakers – that’s as great a rock band as you can see. But if you see them three nights in a row, the songs are going to sound a lot alike. The Black Crowes were never going to be that kind of a band and at times we went too far off the grid for my personal taste. A lot of bands do it in rehearsal – we did it live. For Trigger Hippy, we’re just not even close to a point where I’m thinking about that. By design, it’s a band where there’s a lot of improvisation, too. We have the basic arrangements but the versions allow for longer solos. You can only figure it out once you’ve been playing it for a live audience.

Birmingham Stages: How is the basic set list comprised for a Trigger Hippy show?

Gorman: We’re doing three or four songs from the first album and pretty much everything on this album.

Birmingham Stages: As a drummer, are you a gearhead? Do you comb music stores or websites looking for equipment?

Gorman: No, I see stuff occasionally but I play a four-piece kit and I keep it very simple. Give me some cardboard boxes and I’ll make them sound good.

Code-R Productions Presents: Trigger Hippy at WorkPlay on Saturday, December 14. Ice Station Zebra will open the 8 p.m. show. Tickets are $20 and can be purchased at www.workplay.com.