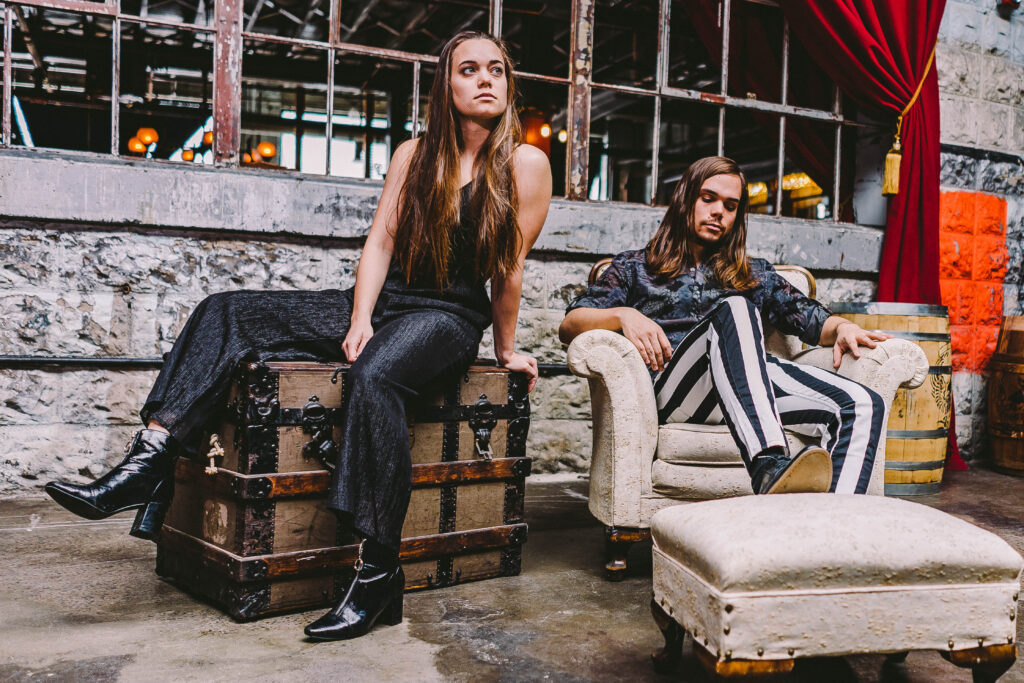 In addition to being sister and brother, Jocelyn & Chris are seasoned musicians to say the least. First performing together at ages 12 and 11, respectively, the sibling duo has spent years writing, recording and touring together. In early 2022, Jocelyn & Chris will release their new album, Favorite Ghosts. The duo is currently riding a wave of success on the strength of the single “Sugar and Spice.” Recently, we caught up with them by phone.

Southern Stages: Jocelyn and Chris, thanks for your time today. Where are you at the present moment?

Jocelyn Arndt: We are actually in the car on the way to a show near Boston – we are on the road.

Southern Stages: We are looking forward to the release of Favorite Ghosts. If you will, talk about the writing and recording of the album.

Chris Arndt: 2019 was a productive year for us – we’d been on the NBC Today show and we’d done a couple of national tours and we wrote most of this album and we recorded a live acoustic album that year. We were planning on releasing this album back in early 2020 but then obviously things got pushed back. We are really excited to finally get new music out there.

Southern Stages: It’s difficult to interview an artist these days without mentioning Covid and the upheaval that followed, mainly the loss of touring income and no audience interaction.

Jocelyn: Definitely. It was like one minute we had the whole summer planned and the next minute it was just gone. Thank God for the Internet because we would have had literally nothing to do if we couldn’t live stream. Nothing substitutes a good rock show, but we were able to live stream a lot and at least know that we were playing for somebody somewhere [laughs]. So that helped us get through for sure.

Jocelyn: The majority of it was recorded at White Lake Studios in Albany, N.Y. with the exception of most of the lead vocals, which were recorded at Clubhouse Studios in Rhinebeck, N.Y. It’s a legendary studio and they had some very choice vintage microphones.

Southern Stages: How does your songwriting process tend to work?

Chris: Jocelyn is definitely much more of a lyricist and a person who can write melodies and I live in the chords and the arrangements and the song structures. We fill out each other’s strengths and weaknesses really, really well. With each song, one of us will have a kernel of an idea – there may be a riff for me or a hook from Jocelyn. Once we have an idea that we think is worth building a song around, we bring in the other person and start throwing stuff against the wall until we have a song.

Jocelyn: You’re right about the accessibility thing and the cool thing about streaming is that anyone anywhere in the world can find you. During lock down, we’d live stream and people would pop up in Australia and Norway and people were able to connect with our music in that way. There are some advantages to it, but there are disadvantages to everything as well. We are indie artists and we are doing this ourselves as are a lot of people out there. It can be really if you’re not a big major label to eek out a little space in the current landscape. The best thing we’ve found is to try everything and nothing beats a good rock show. We connect the most with people when we can actually get in front of them and play live. We try to use the digital aspect to help people find us in the real world which is where the real connection gets made.

Chris: I do love songwriting and being in the studio and crafting the music, but this summer we hadn’t done shows in basically two years and we pushed a radio single called “Sugar and Spice” that got played all over the country and it got played on Birmingham Mountain Radio. To do that radio single push and see people again, I did not realize how much we had all been missing it – it was so nice.

Southern Stages: How do songs stay fresh to you after you’ve played them literally hundreds of times?

Jocelyn: This album will be our eighth studio record. When we were playing gigs in high school, we had three original songs and now we get 90 minutes onstage and we have to pick and choose [laughs]. It’s a good problem to have but it’s a little weird. We do try to mix it up in the set and we don’t get to play everything all the time anymore and that keeps things fresh. We change how we play things a little bit and we don’t even notice how much we tend to do that until we listen back to the original recording.

Southern Stages: Not many artists have the ability to forge their careers with immediate family at their side. If you will, talk about that experience.

Jocelyn: It’s awesome. The funny thing is that neither of us has any perspective of music being any other way because from the very beginning we’ve been playing together. We realize how lucky we are – it’s a fun job, but it can be a really tough job. We’ve always been each other’s best friends and it makes it so much easier.