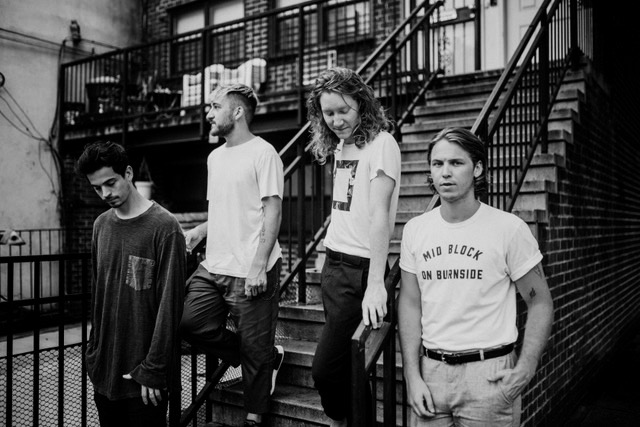 With two full-length releases under its belt, flor is crossing the nation on its current North American tour. The California-by-way-of-Oregon quartet – Zach Grace, McKinley Kitts, Dylan Bauld and Kyle Hill – released ley lines in September of last year. The 12-track collection is garnering acclaim on the strength of singles “slow motion” and “dancing around.” On Wednesday, February 12, flor will perform at Saturn with Winnetka Bowling League and Wanderwild opening the 7 p.m. show. Recently, Grace spoke with us by phone as the band was crossing through California en route to Las Vegas.

Birmingham Stages: Zach, thanks for your time. We are enjoying ley lines. If you will, talk about the creation of the album.

Zach Grace: We went into it thinking we had a backlog and then we just kept creating new stuff. Eventually, all the stuff we were sitting on from earlier years we swapped out for new stuff. We had tons of material, but when it actually came time to commit to a vision for the album we felt like we needed a fresh start.

Birmingham Stages: Was it difficult to write for the new album while you were touring and promoting come out. your hiding?

Grace: It wasn’t actually – it was a pretty easy process. Because I’m on the road, I don’t do much with lyrics or melodies. I create tracks on computer and we bring those into the studio. So I had tons of instrumentals and the lyrical content was a little bit tougher. I want to create a meaningful piece without trying to sound too preachy in the process.

Birmingham Stages: Do songs still evolve even as you’re recording them in the studio?

Grace: That was more so on the first album. I think we added a guitar line to “Heart” maybe a week before we sent it to get mastered. We like to have it all settled and discussed beforehand and we were a little better about it for ley lines. You sit with some of these songs for months at a time and the more you can figure out what you’re trying to say, the more proud you’ll be at the endpoint.

Birmingham Stages: How do songs you’ve played a number of times stay fresh and relevant to you?

Grace: That is entirely dependent on the fans. You would think it would get so old, but when you see a crowd light up when you’re playing your music, you forget that could be the 100th time you’re playing a song. It’s an infectious energy we take from the crowd as much as they get from us.

Birmingham Stages: Some artists say this is a great time to be in your position given instant accessibility to listeners via Youtube, iTunes social media and other modern outlets. Other artists say – for the same reason – that it’s a challenging time to be found among the clutter. How do you view the current climate?

Grace: I feel both sides are very valid, but I think that it’s much more cynical to look at it and say there’s clutter. Anyone and everyone should have the opportunity to create in my opinion – there shouldn’t be any barriers. The more that we break down these barriers, the better. It just means that when you’re creating you have to do a step above the rest if you want to climb out of the ocean. You have to find that thing that rises you up above the rest. I like to go into it with that mentality instead of being disgruntled about the state of it. It’s a beautiful time and it’s a time without barriers and I think that’s really special.

Birmingham Stages: Are you still writing songs and laying down ideas while you’re on tour?

Grace: I am. I feel kind of guilty because I’m more excited than ever with the stuff I’m creating, but I know we have to give the time of day to this second album. But it’s a weird place to be because I’ll be writing this stuff and I want to share it already and I want it to be done, but it’s not on the schedule quite yet.

flor will perform at Saturn on on Wednesday, February 12. Winnetka Bowling League and Wanderwild will open the 7 p.m. show. Advance tickets to the 16+ show are $15 and can be purchased at www.saturnbirmingham.com.